How to Handle Stinging Insects During Fall 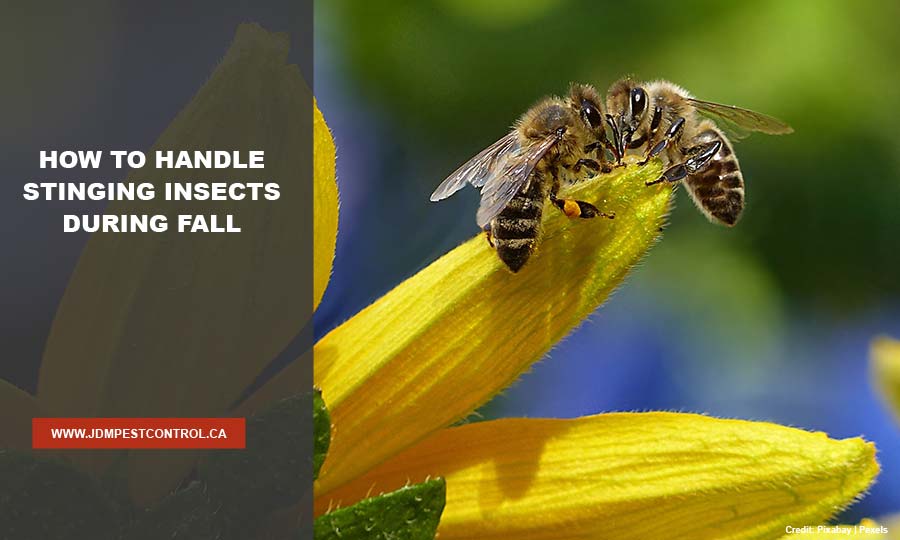 While most insects are completely harmless, there are others that can sting or bite when disturbed. If bees, hornets, and wasps invade your home, it can lead to various problems. This is an even bigger issue during the fall when stinging insects are more aggressive and insect stings and bites become more common. Fortunately, there are a variety of effective ways to handle them. 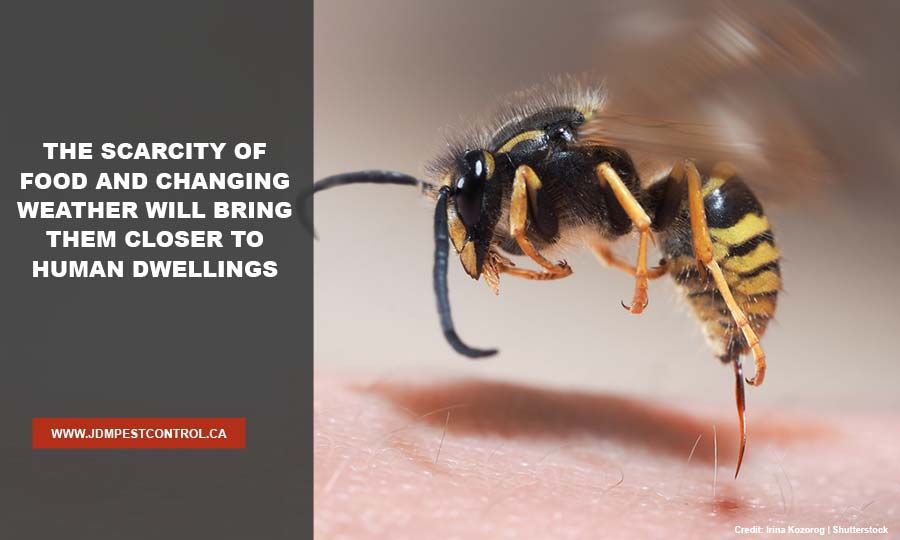 The simple answer is that they mature in the fall. Dry and warm, the summer months are the time for insects to lay eggs and repopulate. These larvae will grow into adults as the autumn months roll in. As they grow in numbers, they will have to seek shelter from the cold. The falling leaves and hibernating flowers, unfortunately, can’t give them what they need so they end up searching for food elsewhere. Fall is a reminder for people to stock up their cupboards and visit their nearest grocery store. Humans are now more equipped to store up on foods with longer shelf lives. This increased efficiency in securing food availability makes it easier for insects to raid your shelves. From sugary confections to savoury main dishes, your house is a cornucopia of goodies for any starving insect colony.

Just like any holiday, an unwanted visitor is always bad news. From painful bites, allergic reactions to stings, pollen aversion, and accidental mishaps, having them around is a big no-no for the occasions. As they grow increasingly hostile in their search for food, they will attack anyone that blocks their way.

Insect infestations are sometimes difficult to find as they tend to build their hives in the crevices of your house that are not easily accessible. These can be found at home vents, chimneys, and attics, which can make the DIY extermination process more complicated. Hiring an expert for the job is always the best way to go about it since they already possess the equipment and chemicals needed for the job.

Knowing your enemy is the first step to formulating an effective battle plan. You first need to know what species you’re dealing with, their behaviour, defence mechanisms, and method of removal. Here is a quick rundown of these common stinging pests:

It may have the name hornet, but this particular insect is a wasp. Recognizable for their black and white stripes, they live in huge pear-shaped nests. Endemic to North America bald-faced hornets in Alberta are a common sight during autumn. Compared to yellow jackets, these hornets are more gentle. However, when threatened, they can become aggressive as they move to protect their nest and their queen.

Bumble bees resemble and are easily confused with some wasp species and the honey bee. They may seem cute and fuzzy on the outside, but their sting can pack a punch when it comes to protecting their queen bumblebee. Round and hairy, these black and yellow critters are often found flitting around your garden, collecting nectar.

When it comes to the honeybee vs. bumblebee comparison, the latter may be smaller, but they can execute the same amount of damage when they sting you. So, if you’re asking, do bumble bees sting? The answer is yes and they don’t die on the first try. They can actually sting you multiple times and they don’t get hurt.

They are rarely domesticated and they can be more aggressive. However, it’s important to note that they only lash out in self-defence.

The name may sound like something that came out of an action film, but this wasp is usually docile in nature. Growing significantly in size, they build their burrows below the ground of your lawn.

However, during fall, you can find them hiding below your floorboards, keeping warm and safe. These wasp species will often venture out to find nectar for their colony’s larvae population. And, as the flowers start to wilt during fall, they’ll be searching for that sweet juice elsewhere inside your house.

Also known as the killer bee, these buzzing insects are not as scary as you think. With their intimidating name, they are actually the opposite and are considered one of the most domesticated insects.

One of Mother Nature’s natural pollinators, these honey bees only sting when they find they are in danger. However, when they are inside your house, they might attack you to protect their queen.

Easily mistaken for honeybees, these black and yellow striped wasps often build their homes in your porch ceilings, under eaves, garages, tool sheds, and barns. Using mud as the main material, they live as lone wolves and raise their young on their own.

Fortunately, their stings are really not at all that common since they often leave the nests and only attack when provoked.

Thin and long-bodied, these wasps can be hard to spot in the midst of the fall foliage. Often red and orange in colour they tend to blend in with the surroundings as a defence.  Named after their paper nests, these hexagonal homes are often open and more vulnerable to attacks.

Do these wasps get more aggressive during fall? Well, these factors make the paper wasp a feisty opponent when it comes to protecting their young. You will often find them in porches, eaves, and window frames.

Also called “cow-killers”, red velvet ants can’t actually kill cows — and neither are they ants. These insects are red wasps that can produce a severe sting when threatened. Males possess wings while females do not which makes them resemble ants. Interestingly enough, it’s the flightless females that you need to look out for since they’re the ones that sting.

One of the most common household pests, this insect can invade any cookout and feast. Ranking high on the aggressive scale, they are not afraid of human contact and will attack with the slightest signs of provocation.

The good news though is that their nests can be as big as basketballs, making it easier for you to detect and remove them.

Insect sting treatment is not the same as treating an insect bite. The former is a more delicate procedure. With a sting, the insect injects venom into your bloodstream. Some people can have allergic reactions to stings which, when left untreated, could lead to severe complications and even fatality. Different stings will also exhibit different symptoms depending on the sting type.

However, a common sign of an insect sting is inflammation, redness, swelling, and pain in the area. Other symptoms could include heavy breathing, swelling tongue, rashes, and more, depending on whether you are allergic to it. The best first aid assistance is to remove the sting, wash the area with soap and water, put on some ice pack, and take an antihistamine.

A standard bee control service deals with the removal of the hive and sealing off of any possible entrance and nesting sites.  Usually found in attics and wall spaces, these bee colonies are easily identified by their appearance and aggressive behaviour. To prevent them from rummaging through your groceries, try packing your food in airtight containers or covering your dishes.

Hornet infestations are commonly found in your porches and wall spaces. Preferring to build nests on wooden surfaces, they can rapidly reproduce when left unchecked. They are also known to be enemies of bees. The best prevention method for them is using aerosol sprays to drive them away and treating your house’s wooden structure with pesticides.  There is a non-chemical approach though that involves an expert physically removing the hornet’s nest.

Wasp nest removal is a task reserved for experts. Going the DIY route can be hazardous. So, as a homeowner, the next best thing that you can do is prevent any future infestation. One way of doing that is making natural concoctions that repulse wasps. Some recipes include a clove and lemongrass combo, peppermint oil candles, including soap and water traps. 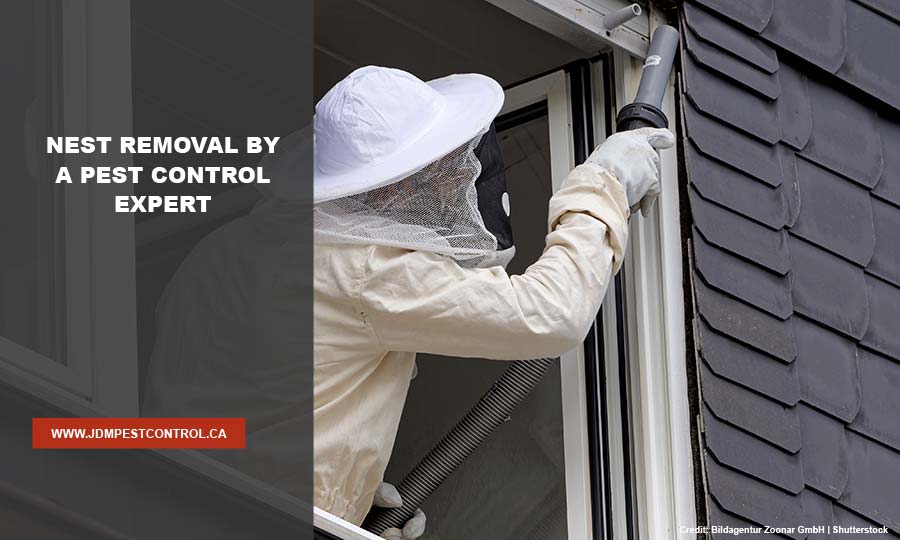 During the fall months, foragers of insect colonies will do whatever it takes to find food and will become even more aggressive to beat the competition. The fall season also signals a change in the dietary needs of stinging insects. Instead of craving proteins like they do during the summer and spring, they will then switch their diet to carbs and fat that they can store up during the winter months.

All these factors combined can lead to their invasion in your fall outdoor picnics, holiday banquets, and pumpkin pickings. It’s important to note that these populations will gradually decrease as winter takes hold, but it’s vital that you get to control their population during fall. This way, you can make sure that their nest colonies won’t bother your home when the fall festivities begin.

If you suspect that your home has been invaded by bees or wasps, get in touch with JDM Pest Control. We provide immediate bee and wasp removal for residences in Aurora, New Market, Richmond Hill, and Vaughan. Call us today at (416) 729-3568 for a free assessment.